NOTE: A new way to record tribute gifts is available. Please read about how this change may impact you, and learn how to use the new feature. You can still add memorial and honorary gifts and acknowledge them as described in this article.

When a donor gives a gift in memory of a deceased constituent, it is a common (and good) practice to notify the family members. Similarly, with gifts made in honor of a constituent, you may want to send a notification letter to the constituent being honored. The acknowledgment system within LGL supports both cases; but they are a bit different, so we treat them separately below.

If you receive a gift in memory of someone, the first thing you'll want to do is to set up a couple of "In memory of" acknowledgment mailing templates, one for the donor and another for those who should be notified (if available). In all, three constituent records are required to acknowledge memorial/honorary gifts:

The graphic below shows an example of how these records can be related to one another. 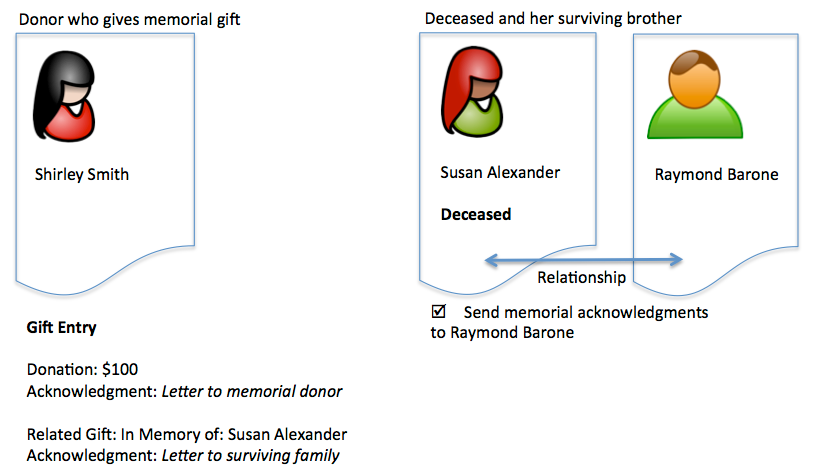 Set up the acknowledgment templates

Please refer to this article for details on how to set up an acknowledgment letter template.

The template you use to send an acknowledgment letter to your donor is different from a typical acknowledgment letter template in that you can use a special field to reference the constituent being memorialized: [[gifts.ack.mem.honorary_name]]. This field pulls in the Honorary Name (a field from the Name Information section of the constituent details page) for the deceased constituent. If Honorary Name is not defined for the deceased constituent, it will pull their first and last names combined.

Secondly, you will want to set up a template that can be mailed to the deceased constituent's family, if you have this information available. In this template, you won't refer to gift amounts but rather to the number of donations you've received in memory of the deceased (in the current batch) and the names of the constituents who donated.

In cases where just one gift has been received, this would read:

We wanted to let you know that we have received one donation in memory of John Smith, from John Doe.

In cases where multiple gifts have been received, it might read:

We wanted to let you know that we have received three donations in memory of John Smith from John Doe, George Green, and James Smith.

You also have the option to include the donor names and addresses in a table by using the merge field named [[gifts.ack.donor.addresses]].

Define who should receive memorial acknowledgments

If the deceased is part of a joint household record, you will need to split that record into two records in order to generate the appropriate memorial acknowledgments. The easiest way to do this is to "clone" the record and then edit the original and the cloned records as appropriate. For more on that process, please see Managing data for deceased constituents.

Enter the donation into LGL using the standard gift entry process, making sure you also add a related "In memory of" gift that is connected to the deceased constituent. In addition, make sure you set that gift to be acknowledged using the appropriate template (see the “Set up the acknowledgment templates” section earlier in this article):

Set up the templates

In the template to the donor, you can use the field [[gifts.ack.hon.honorary_name]], which pulls in the Honorary Name for the honoree constituent, if defined, or the first and last name in their constituent record if the honoree name is not defined. Here is an example of how you can use this merge field in your letter:

Another option is to include a table of the names and addresses, which you can do using this merge field: [[gifts.ack.donor.addresses]].

In the template for the letter that can be mailed to the honoree, you won't refer to gift amounts but rather to the number of donations you've received in their honor (in the current batch) and the names of the constituents who donated. Here’s an example of how that sentence might look in your letter template:

When multiple gifts in honor of the same constituent appear in one batch, the names of those donors will be formatted into a sentence.

Now you can enter the gift into LGL using the standard gift entry process, making sure you add a related "In honor of" gift that is connected to the constituent being honored:

For any of these cases, we recommend using the Gift Note field to capture an “in memory of” or "in honor of" message that you can then include in the acknowledgment letter you send to the donor. If you want to send a letter to the honoree as well, you would need to do that outside of LGL (though you can always upload a copy as a file in the donor's constituent record if you like).

If your gift note contains the phrase "in memory of Tootsie", then the acknowledgment letter would read:

Thank you for your donation of $100 in memory of Tootsie.